LEARN ABOUT OUR AREA’S RICH HISTORY.

Spend a historic day touring the Lebanon Valley. From gothic architecture to one of the oldest transportation tunnels in the U.S. to the renowned Cornwall iron furnace, there are many sites to see. Lebanon County has a rich history and beautiful architecture to show for it. When you visit the Lebanon Valley, you will find Victorian Gothic style buildings and original 18th century colonial buildings that tell a unique story.
Download our self-guided Downtown Lebanon architecture tour and the History & Heritage Itinerary for your visit. 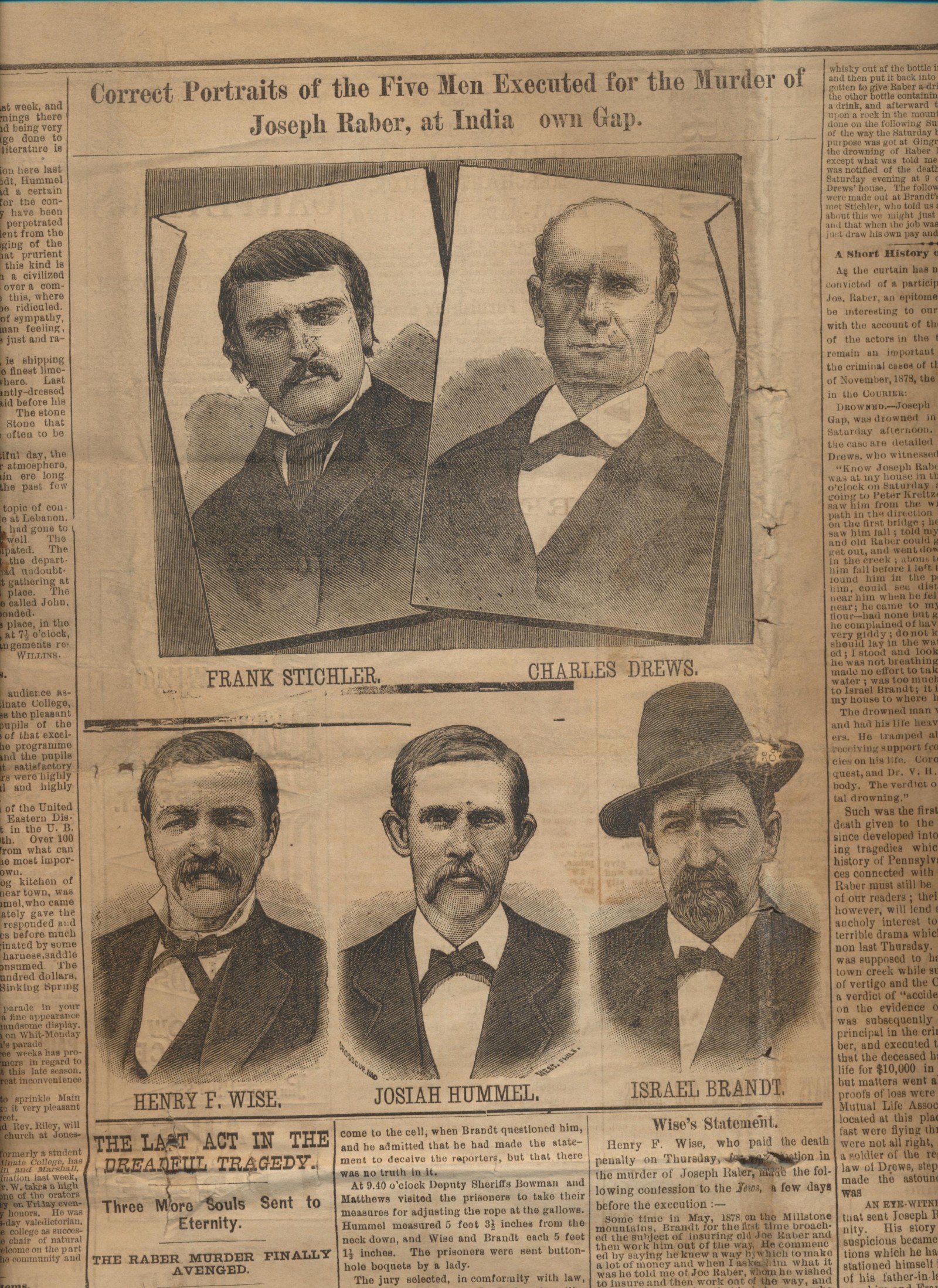 It all began in a hotel room in Lebanon County, Pennsylvania, where four men met to hatch a plan of murder.

The men took several life insurance policies out on an impoverished neighbor Joseph Raber, and declared they were planning to take care of Raber for the rest of his life and cover his burial expenses upon his death. The policies totaled $8,000. In reality, the men intended to kill Raber and collect the policy payout for themselves.

The paperwork was signed and soon after, the four men hired two assassins to drown Raber in the Indiantown Run. The coroner declared Raber’s death an accident, and his remains were laid to rest in the Moonshine United Zion Church cemetery.

The men almost got away with it, until the son-in-law of one of the original conspirators came forward to police and the men were arrested in connection with Raber’s death. In an unprecedented court decision, all six men – the four conspirators plus the two assassins – were tried together. This, along with the fact that each suspect had blue eyes, led the newspapers to refer to the men as the Blue Eyed Six. All six were found guilty of murder in April 1879, though one of the conspirators, George Zechman, was later granted a second trail and acquitted due to lack of evidence against him. The remaining five were sentenced to death by hanging. The executions of the attackers occurred at the county prison. Today, the county prison’s original location is the beautifully restored Farmers Market in the center of town.

Chestnut Street Log House is a historic home located in Lebanon, Lebanon County, Pennsylvania. It was built around 1772, and is a 1 1/2-story, rectangular log residence on a limestone […]

Cornwall, PA – It is difficult to imagine that this quiet cluster of beautiful buildings nestled in the rolling hills of Lebanon County was once the home of a fire-breathing blast furnace with an insatiable appetite for rocks and wood!

Annville, PA - The elaborate Pennsylvania Veterans’ Memorial is the largest monument in VA’s National cemeteries. The combination open-air space and building stands 107 feet high and 360 feet long. Its design evokes "the ruins of a war-torn building centered in a land of solemnity."

Schaefferstown, PA – Enjoy great food, great service and a wonderful atmosphere in a historic building. Stop by the tavern or one of the beautifully decorated dining rooms, which are available for banquets or private parties.

Mt. Gretna, PA - This historic theater is one of America's oldest summer theatres and has been operating at the Mount Gretna Playhouse since 1927.

Annville, PA – Harper’s Tavern offers casual dining with a touch of history to great food for an unmatched combination.

SCHAEFFERSTOWN’S HISTORY COMES ALIVE Historic Schaefferstown provides information through educational programs for adults and children, tours of its buildings and collections, festivals and special events, and publications of research and […]

Circa 1750; on the National Register of Historic Places.

Lebanon, PA – A 30,000 square foot historically restored facility occupying nearly one-half the block. This original 1892 Farm Market Building has been preserved to the beauty of it's 19th century birth while creating a 21st century shopping experience!

The Tract of land on  which Light’s Fort was built, in 1742, was situated on a branch of the  Quittapahilla Creek in Lancaster County (now Lebanon County) at 11th and  Maple […]

The Monroe Valley Chapel is a student-renovated historical place of worship erected between 1760 and 1800 in Swatara Township, Lebanon County, Pennsylvania

Mt. Gretna, PA - The Society is charged with preserving the heritage of the entire Mount Gretna area

HISTORY CAN BE FOUND IN OUR FOOD   Since 1902, Seltzer’s Bologna uses a unique blend of spices and 100% beef, along with a 3-day natural hardwood smoking process that […]

Lebanon, PA – The Lebanon County Historical Society was organized in 1898 by a group of interested local citizens and amateur historians. The Society was considered the county’s attic until 1935, when the group offered its first public exhibits. Today, the LCHS is a place where residents and visitors alike can experience our history first-hand, as well as conduct their own historical research and have access to related gifts and souvenirs. The LCHS is truly one of Lebanon County’s hidden gems.

Lebanon, PA – Situated on 109 acres of meadows and woods, you will find the oldest existing transportation tunnel in the U.S - The Union Canal. The Tunnel was completed in 1827 and today is a treasured National Historic Landmark.

We invite you on a 1.4-mile loop featuring some of the architectural treasures throughout the historic downtown Lebanon. Our 2019 Architectural Guide features the following stops: 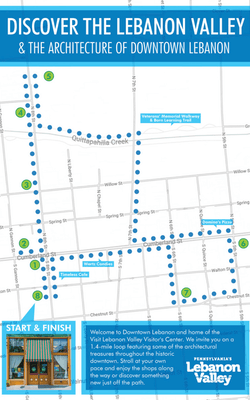 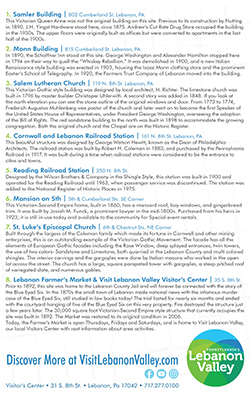 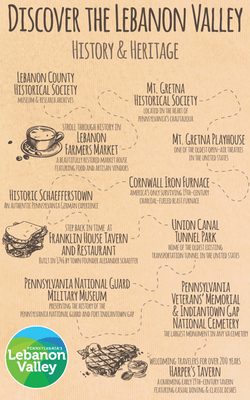 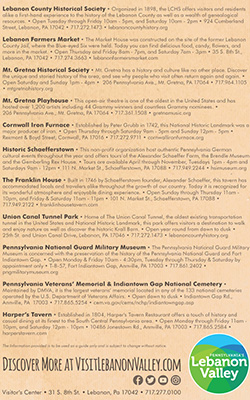 The Mt. Gretna Area Historical Society gives you an in-depth history of “A Park in the Woods”. Learn about this area’s rich culture, deep past, and fascinating facts as you experience a virtual tour of the historical society museum. For more information about Mt. Gretna, click here.

Come visit us at 115 Springwood Dr.