So We Never Forget

So We Never Forget: A Memorial Day Blog

This year, in honor of Memorial Day, our family decided to make a trip to the National Cemetery at Fort Indiantown Gap. I had heard of this place before, but we had never made the effort to see it for ourselves.

Stepping out of our car we were met with the sweet smell of a lilac bush, and it didn’t take long for us to realize that we had stepped onto sacred ground. There was a feeling of stillness and reverence (a feeling I don’t often get with four children in tow!) as we walked toward the tall towers of the memorial.

The space inside the open-air memorial makes one feel small among the concrete walls but is also comforting and restful with small trees growing and benches placed strategically throughout the area. We walked the perimeter, pausing to look at the names or titles etched into the wall. Our daughters had so many questions and it naturally led to conversations about what it means to be a soldier who protects our land and who might ultimately give his or her life for our sake. 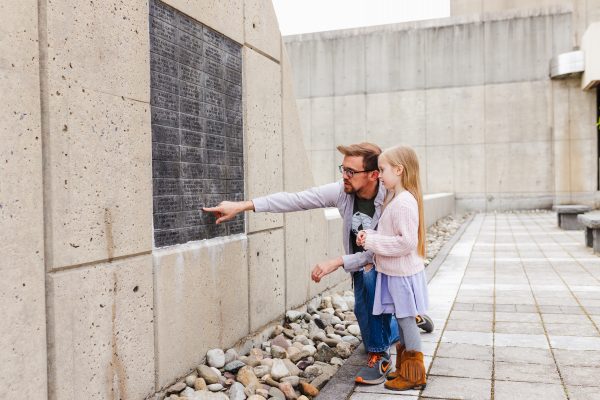 Following the road led us to one of the many columbariums (structures with niches that hold urns) as well as rows of grave sites with crisp white markers. My daughters were impressed with how many of them there were, and also how many last names they recognized. We even found some that had our own surname “Boyer” on them.

We began making our way back to the car. As we were walking out, I spotted a red-winged blackbird diving in and out of some cattails nearby. I learned afterward that outside the well-maintained grounds of the national cemetery is a conserved area that is the home of an endangered species of butterfly–the Regal Fritillary–which is known for its brilliant orange wings. Free public tours of the grassland habitats happen annually, generally in July.

For the history buffs out there, Fort Indiantown Gap has a very nice museum located in a two-story barracks built in 1941. It is free of charge to the general public and showcases weapons and items from the Civil War, Gulf War, as well as the Pennsylvania National Guard.

Driving back home I realized how lucky we are to live in a land so rich in history, a place where my children can begin to gain an appreciation for our country and the many soldiers who made us what we are.

Hi, I’m Naomi. I’m married to the best guy in town and am a mom of four fabulous daughters. I’m also a local family photographer here in Lebanon who creates fun, meaningful portraits in all seasons of life.